PNG has 4 regions and 20 provinces, and is slightly larger than the state of California.

The climate is tropical with the Northwest monsoon from December to March, and the Southeast monsoon from May to October. There are slight seasonal temperature variations.

PNG has one of the world’s largest swamps along its Southwest coast. This is where we serve.

The terrain of Papua New Guinea is mostly mountainous with coastal lowlands and rolling foothills. The elevation goes from 0 meters at the Pacific Ocean to 4,509 meters at the top of Mount Wilhelm.

The capital of PNG is Port Moresby

Papua New Guinea is a group of several islands located North of Australia.

The People: PNG has an indigenous population and is considered one of the most heterogeneous in the world. It has several thousand separate communities (most containing only a few hundred people), which are divided by language, customs, and traditions. These separate communities are so divided that it makes governing difficult, leading to conflicts and lawlessness.

Official Languages include: Tok Pisin, English, and Hiri Motu. Also 860 indigenous languages are spoken (over one tenth of the world’s total). Note: Tok Pisin is a creole language and is widely used and understood; English is spoken by 1%-2% of population; Hiri Motu is spoken by less than 2%.

Literacy: 57.3% of population being age 15 or older can read and write.

The risk for major infectious diseases is very high.

The most common food and water borne diseases are Bacterial Diarrhea, Hepatitis A, and Typhoid Fever.

Papua New Guinea has the highest incidence of HIV/AIDS in the Pacific Region. Also the 4th country in Asia Pacific Region to fit criteria for generalized HIV/AIDS epidemic. (1.5% of adult prevalence rate for HIV/AIDS – 54,000 people have this disease.) 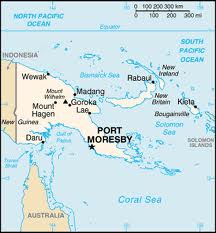